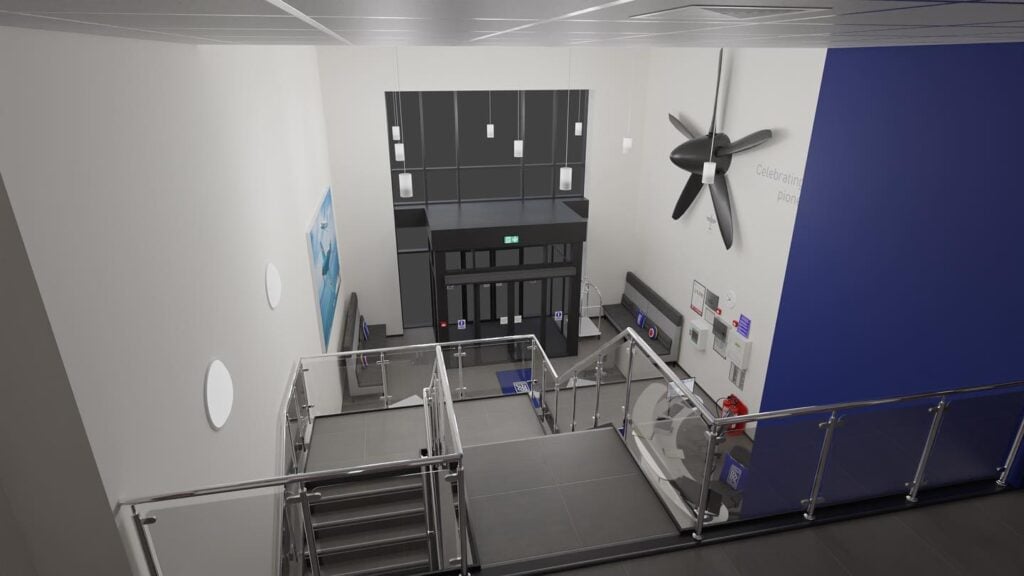 Through his social network accounts, Pyreegue has been continuously sharing screenshots of the Rolls-Royce hangars at East Midlands Airport this month. The scenery is being developed for Microsoft Flight Simulator.

While we usually don’t tend to report on previews of hangars, this one is done with an exceptional level of detail that deserves attention.

Because Pyreegue is not only recreating the facility from the outside, but also the inside, and with that sort of detail, many community members are questioning whether these are renders or pictures from the facility.

It’s important to note that, as he states, he’s a “one man band“, thus he doesn’t have a huge team behind him and it’s mostly him putting it all together.

The previews are showcasing the reception area and the hangar interior with a static model of the Rolls-Royce Electroflight NXTE aircraft and their new UltraFan engine. In addition, one of the previews demonstrates Pyreegue’s meticulous attention to detail, as the hangar is recreated with all of the supporting beams.

We can also notice present tool racks, various cabinets around the hangar, electricity boxes, modelled doors, and even paintings, banners, and lights on the walls or hanging from the ceiling. Not to mention various static objects in the reception area, adding to the overall immersion and authenticity of the space.

To look closer at the Rolls-Royce Electroflight NXTE aircraft, Pyreegue has also posted a close-up screenshot of the aircraft’s engine area, showcasing even the smallest of details with the PBR materials in place.

This sort of detail is very unusual for scenery projects where some developers are hesitant about featuring interiors at all, not to mention this is the interior of a hangar at the airport, not the terminal itself. Pyreegue did not yet share any closer information on the scenery itself, but from the previews, it looks very promising. The team at iniBuilds has recently taken to their Youtube channel to announce the release of their rendition of Nadi Airport (NFFN) for Microsoft Flight Simulator. This is the second oceanic airport that the developers at iniScene have brought to life. The scenery features a true-to-life recreation of the airport’s landside with custom decals, signposts, parking barriers, and even more details. Furthermore, the development team has accurately recreated airport lighting […]