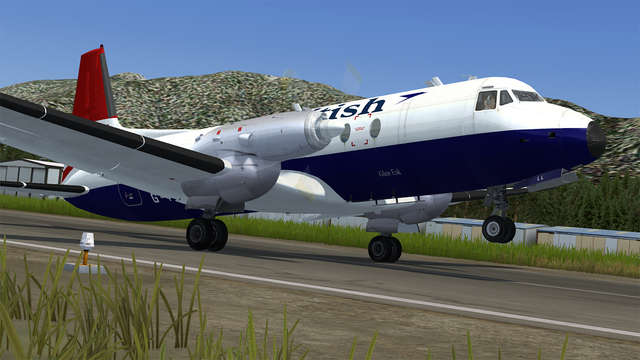 HS 748 Propliner for FSX and P3D includes the Series 2A variant in 16 liveries. The detailed virtual cockpit features 3D instruments, a comprehensive avionics suite including a GNS 430 and a realistic, easy-to-use autopilot with pitch and bank hold.
In the late 1950s, the search was already on for a worthwhile replacement for the Douglas DC-3; with the introduction of the turboprop engine, the venerable ‘Dakota’ was no longer economically viable in the eyes of many short-haul operators.

The Vickers Viscount was already performing well in the short-haul market and had attracted buyers from all over the world, and the Fokker F-27 ‘Friendship’ was a proven twin-engine design with a high-wing configuration. Avro, the original company responsible for the development of the 748, had indications from potential customers that a sturdier, low-wing concept would be more acceptable, especially for rugged conditions. Avro planned the 748 as a low-wing, high-lift design with the same Rolls-Royce Dart engines as the Fokker, mounted in self-contained pod-like nacelle structures which also carried extremely strong landing gear. Ground clearance was excellent and the aircraft was proven to be able to haul payloads in excess of 10,000lb, operating out of remote short-strip airfields with little or no support services.

The first 748 flew on the 24th June 1960 and, as Avro became engulfed in the Hawker Siddeley Group, the Series 1 aircraft became known as the HS 748. The Series 2A (the subject of this simulation) was given more powerful RR Darts and an optional large forward cargo door.

By the time the last 748 rolled off the production line, 380 airframes had been constructed. So popular was the success of the design in STOL and short-haul operations that many are still flying around the world today.

Republicans vote to block Boeing from selling airplanes to Iran