Through their forums, iniBuilds’ Ubaid has made a statement in regards to the somewhat controversial topic of “iniBuilds & X-Plane 12“. The developers were holding back from making any statements heretofore since they wanted to gather information on whether or not supporting X-Plane 12 is going to make sense for the team first.

Nonetheless, Ubaid has confirmed that they will be bringing the Airbus A300V2 to X-Plane 12 as a free update for the owners of the A300V2 for X-Plane 11. What’s more, Ubaid has also announced they the team is contemplating a significant price reduction across the whole aircraft family.

In regards to this X-Plane 12 update, it’s important to note, that iniBuilds is only working on a compatibility update, thus will not offer new or improved features, but rather will ensure that existing features work properly.

At this time, the update is not planned to release this year, but sometime in 2023. In addition, Ubaid has yet only confirmed intentions of bringing the A300V2 to X-Plane 12 and not any other aircraft.

He also further added: “While we are still hesitant of the future of XP12 for us as an organization, we hope this news brings some clarity for our XP11 customers who are still using this simulator.“.

On a similar note, ToLiss has recently left the iniBuilds Store because they felt that iniBuilds no longer focuses enough on X-Plane as a platform. You can read our unbiased explanation of that in our other article by clicking here. 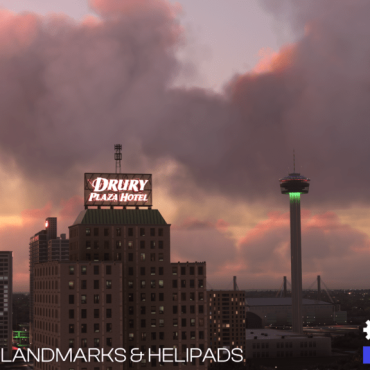 iniBuilds is proud to present the next scenery for Microsoft Flight Simulator to the community, this time of San Antonio, Texas, USA. The scenery is going to bring the city to life with custom landmarks and local helipads. The developer, who also made the scenery of the local airport in San Antonio for MSFS, is this time focusing on carefully and meticulously recreating the city, featuring all local landmarks as […]