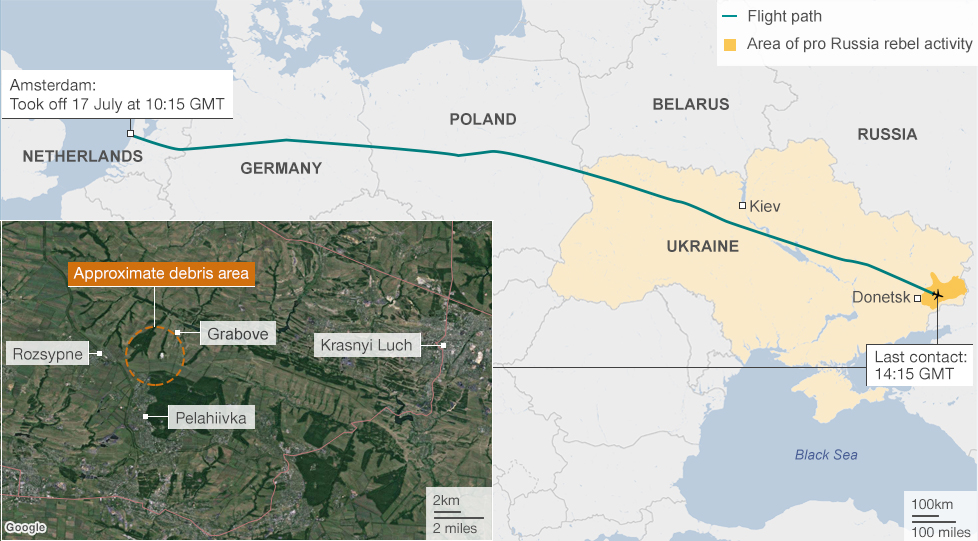 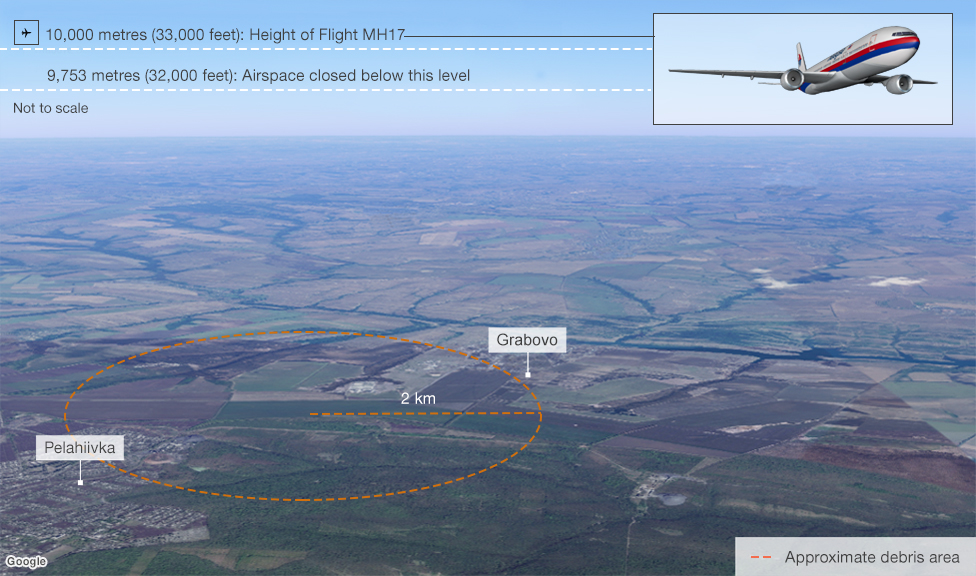 All 298 people on board a Malaysia Airlines plane have died after the airliner crashed in eastern Ukraine, close to the border with Russia.

Flight MH17 from Amsterdam to Kuala Lumpur was travelling over the conflict-hit region when it disappeared from radar. A total of 283 passengers, including some 80 children, and 15 crew members were on board.

The crashed plane was a Boeing 777-200ER, the same model as Malaysia Airlines flight MH370, which disappeared while travelling from Kuala Lumpur to Beijing in March.

The aircraft, manufactured in 1997, had a clean maintenance record and its last check was on 11 July, Malaysia Airlines said.

Malaysia’s prime minister said there was no distress call before the plane went down.

According to Malaysia Airlines, the plane departed Amsterdam’s Schiphol Airport at 10:15 GMT (12:15 local time) on 17 July and was due to arrive at Kuala Lumpur International Airport at 22:10 GMT (06:10 local time).

Footage later emerged of the crash site, and witnesses spoke of dozens of bodies on the ground.

The two sides in Ukraine’s civil conflict have accused each other of shooting down the jet with a missile.

US intelligence authorities said a surface-to-air missile brought down the plane but it was not yet clear who fired it.

Ukrainian authorities later released a recording they claimed was a conversation between pro-Russian militants admitting to shooting down the plane.

However, separatist leader Alexander Borodai accused the Ukrainian government of attacking the airliner itself.

Experts says flight crash investigators should be able to determine what caused the crash from traces left on the debris.

There were also four Germans, four Belgians, three Filipinos, one Canadian and one New Zealander on board.

At least six of those killed were delegates on their way to an international conference on Aids in Melbourne, Australia.

Professor Joep Lange – a prominent scientist and a former president of the International Aids Society (IAS), was among those who died.

His colleagues have described him as “a great clinical scientist” and “a wonderful person and a great professional”.

Other stories of passengers and crew emerging include a Malaysia-Dutch family of five, a Dutch couple on their way to Bali, an Australian pathologist and his wife returning from a European holiday, as well as a Malaysian flight steward whose wife – who also works for Malaysia Airlines – had narrowly escaped death when she pulled out of a shift working on missing flight MH370.