Boeing to cut 4,000 jobs as battle with Airbus continues 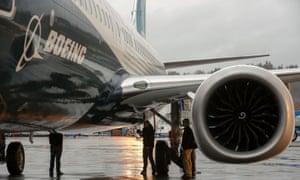 Boeing is cutting about 4,000 jobs and could double that number this year to slash costs as the world’s biggest aeroplane maker faces intense competition from Europe’s Airbus.

The Chicago-based company said it would reduce the headcount in its commercial airlines division by 4,000, with around one-third through voluntary layoffs and the rest by leaving positions unfilled, a spokesman said.

“While there is no employment reduction target, the more we can control costs as a whole the less impact there will be to employment,” Boeing’s Doug Alder told Reuters.

The job cuts would include hundreds of executives and managers, and employees would only be forced to leave as a last resort, he said.

Boeing will also cut about 10% of the 5,700 jobs in its test and evaluation division, which conducts flight and lab tests, the company said. Boeing had a total of 161,400 employees at the end of December, with the commercial airlines division making up about half that number.

The Seattle Times reported that the company, which has dominated the global airline business for decades, was aiming for a 10% overall cut in Washington – which would mean about 8,000 jobs going in the north-western US state, where Boeing employs almost 80,000.

In February, Ray Conner, the head of Boeing’s aircraft business, warned employees that job cuts were necessary to “win in the market, fund our growth and operate as a healthy business”.

The American company, maker of the famed 747 jumbo jet and the US’s biggest exporter, has been overtaken as the world number one for future orders byAirbus. Conner told employees Boeing needed to slash costs because it was in a price war with its European rival.

“Their biggest weapon that they’re using … today is price. They are attacking us with price in every single campaign [for orders]. And as a result of that, you know, we’re being pushed to the wall,” he said.

In January, Airbus claimed it had 57% of the market by units ordered, with the 1,036 planes in 2015 making its cumulative order book more than $1tn (£693bn). Its fuel-efficient A320neo family of planes had given it a dominant position in the market for smaller, short-haul aircraft, it said, although Boeing was selling more wide-body planes.

Boeing delivered a record 762 planes in 2015 for revenues of $125bn, compared with Airbus’s 635 aircraft, earning it $91.6bn. Analysts had expected Boeing’s aircraft deliveries to rise this year but in January it indicated the number would be down by about 20 on last year due to internal production changes.

Dennis Muilenburg, Boeing’s new chief executive, tried to reassure investors that the lower number of deliveries was not due to declining demand for planes – but the announcement, coupled with a lower-than-expected profit outlook, sent Boeing’s shares tumbling on 27 January.

Boeing is attempting to overhaul its sprawling commercial jetliner manufacturing arm as Muilenburg seeks to make his mark. Muilenburg, who took over last July, used cost cuts to shore up profits in a period of constrained defence spending when he ran Boeing’s defence unit.

The company is seeking savings beyond job cuts by renegotiating supplier contracts, consolidating spending programmes, slashing business travel and trying to boost productivity and reduce excess stocks. The total number of job cuts required will in part be dictated by the success of those initiatives.

“While there is no employment reduction target, the more we can control costs as a whole the less impact there will be to employment,” the company said.